Did you know that last year was the worst year for the US stock market since 2008, with more down days than positive ones? But even as the market continued to fall, there were still winners and losers across all different industries, which may have affected the growth of your investments.

How did the year start?

Many people started 2022 reasonably optimistic. Having come through the back end of the pandemic, which had initially caused markets to fall significantly – they quickly bounced back. Come February, things changed with Russia launching a full-scale invasion of Ukraine, and the markets reacted.

Using data from finviz, we’ve summarised some of the biggest winners and losers of 2022 in market growth, including data from industries such as technology, energy and healthcare.

Technology suffered huge losses in market capitalisation. Apple saw $846 billion wiped off its market cap, a decline of 27%, making them the biggest loser of the year in absolute terms. Amazon wasn’t far behind, losing $834 billion in market cap, down 50%. Nvidia and Salesforce were down 50% and 48%, respectively.

Google finished the year down 39%, and Meta (Facebook) dropped a whopping 64%, a reduction in market capitalisation of $464 billion.

Soaring interest rates driving the cost of debt up made it a challenging year for the real estate market. Digital Realty dropped 43%, and WeWork dropped more than 80%.

Asset managers also suffered. The giant companies that are Blackstone and KKR, both fell in market cap significantly, with Blackstone’s share price declining 42% over the year.

Supply chain issues plagued the industry, with EV-only companies suffering the most. Despite Tesla delivering 40% more vehicles in the year, their stock price was down 65%, and Rivian finished a whopping 82% down.

Energy was the best-performing sector, with ExxonMobil achieving record profits in Q3 and their share price rising 80%. Chevron’s share price was also up over 50% for the year.

There was a slightly more mixed bag in the healthcare sector, with the most substantial growth in the companies specialising in distribution. Companies such as Pfizer, who finished down 12%, were most likely seeing a decline off the back of the pandemic years, where their share price growth had been exponential. Merck saw the strongest share price growth of 45%, with many others just a little behind.

Insurance companies in the US raised their premiums over 2022 to restore profitability in the face of inflation, with Progressive achieving 26% growth in their share price.

Perhaps understandably, given the current climate in the East of Europe, defence companies saw a bumper year in terms of their stock prices. Northrop Grumman finished the year up 41%, driven by their space segment, which will build over 3,000 booster rockets to get Amazon’s satellites into space. Lockheed Martin also grew their market cap by 38%, thanks partly to the announcement of some large US defence department contracts.

What can we learn

There was an increase in easy-to-use/accessible trading platforms such as Robinhood. It could be argued that these platforms provide a less-sophisticated investor audience access to trading, which may have resulted in many well-known companies becoming overvalued since many new investors are likely to have bought shares in companies they are familiar with instead of looking for ‘value’.

Many younger investors had also been drawn into the market, who had grown up when stock markets had almost only gone up since 2008 and perhaps needed to gain the experience to understand their risk profile properly.

The best example of a disproportionate market cap is Tesla, which in late 2021 had a $1 trillion valuation, more than Toyota, VW, Daimler, Ford, and GM combined. Regardless of Tesla’s successes, it would be hard to argue that it wasn’t overvalued.

The impact of this new wave of inexperienced and over-optimistic investors is particularly poignant when looking at the crypto markets, which some argue were driven entirely by marketing rather than potential use value. Coinbase fell 86%, and we all know what happened to the crypto exchange FTX.

The key messages here are:

If you are looking to start a portfolio or have concerns regarding your existing plans, speak to one of our team to find out how our low-cost, diversified portfolios could help you. 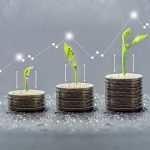